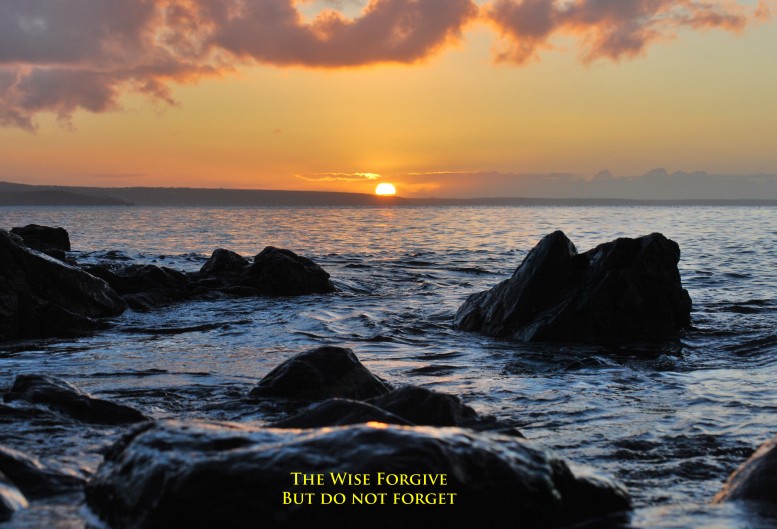 We were close growing up, but I had avoided him for years.  I wasn’t expecting this call.  She said he was still using drugs and alcohol to deal with his pain.  I was relieved to hear he was dying.  Years of keeping my distance from him helped me keep out of my mind what had happened.

“Just call him,” she said.  “You’ll never get another chance.”  Somehow, deep inside, I knew she was right.  There was some part inside me that said, “You need to do this.” Maybe it was my conscience, letting me know there was some unfinished business.

After a couple of days, I relented.  I called him.  Of all the things that we might have talked about, instead he asked, “Did you call to ask for my forgiveness?”   I was furious.  Ask for his forgiveness!   Was he serious?  He was the one who tried to kill me!

I hung up, angry and wondering why he would even ask that question.  Here he was turning blame for his mistakes onto someone else again.

What was this about and what in the world would I want him to forgive me for?  Then it came, the memory I had buried deep inside me all these years.  He was the one, in his drugged and drunken state, who tried to kill me years ago.  Then he blamed me for it happening.  It was a terrible thing and in some strangely human way, I somehow took on a piece of that guilt.

The reason we take on the blame is because we have a need to feel that we have some control in the situation.  If I take some responsibility, then perhaps I can do something about it.  But it is a false hope, because we have no way to control the rebellion of others or the consequences of serious actions.

My instincts were that not thinking about this terror would allow it to fade away.  Healing would come in due time.  I never connected the dots that this denial and separation were keeping me from resolving the fear and rage I felt.  I could not find a path to discard the inner guilt that was not mine to bear.

So I lived with the burden of a vague fear, rage and doubt.  Many nights I just laid in fear before I fell asleep, never knowing what I feared.  I came to believe that this was how everyone felt each day.

Was there a terrible event in your life?  Did you want to find some control to perhaps save yourself or someone else from the pain.  Was there too much blame for this unfortunate situation?  Did you change your perspective of who you are, or what you are capable of?

Then a surprise happened for me.  The day we buried him, I noticed some tears.  They were peaceful tears, not the missing and longing kind.   My tears were ones of knowing what it felt like to be without the fear, doubt and silent rage.  My whole emotional state of being had shifted.

It was the self-forgiveness that released me.  I wasn’t a victim anymore.  In the depths of opening that wound of feeling completely powerless, I found the source of my fear.  It was in forgiving myself for carrying the blame that was not mine, that was the true healing.

If someone has caused you much grief and pain, maybe you can find a path of discovery to forgive yourself.  What erroneous beliefs about that event have you taken on?

Do you have a wound or a grudge?  Does it need at last to be forgiven?  Do it for you!

This story is an example of the importance to consider your beliefs and choose to change them when needed….

Check out the Miracle Grids Store for Video Meditations to help change your life to magnetize what you want.