Breakthrough Product for your Health

Just like you, I eat well, take supplements, get exercise and maintain positive thinking. I studied and practiced good nutrition, guided meditation, and now - natural healing. As a chemical engineer I worked to develop and manufacture medical devices and pharmaceutical medicines. I learned we must take care of ourselves by living a healthy life with the spirituality to live our higher purpose.

Watch video to learn about  AOScan

Try this sample healing Frequency with your & your oversoul's permission.

Use ear listening devices for the best healing experience with one of my best meditation videos to date.

See if it works for you. Below is more information and you can contact me for being part of this amazing business opportunity. Or maybe an AOScan for yourself.

Go to my shop

Then, if you plan on using it personally only, go to Preferred Customer under the shop menu.

Or, If you plan to use it as a business and sell devices go to Distributor under shop menu. (Your $49 annual membership will be added to your cart automatically.)

Now you can place the order for your preferred product. See below. 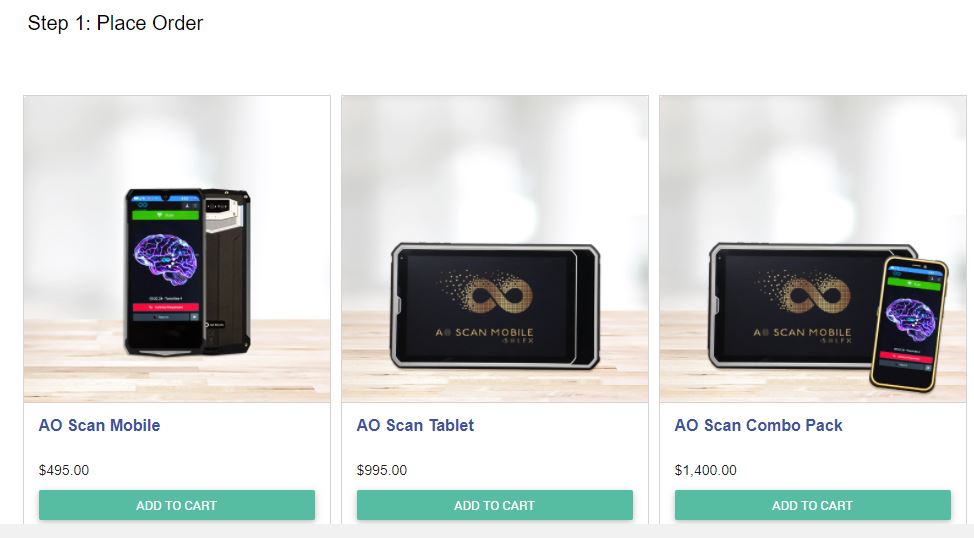 I have been dealing with anxiety and stressful triggers for too long. Listening to my AOScan frequencies every morning before work gives me what I need to face the day. Just a few minutes to set aside, close my eyes and listen to the frequencies helps diffuse me before I head out the door.

It is with great pleasure I write this testimonial for Susan Suehr and her AO Scan product.  Since the introduction of this product in October to now late March I can state the following.

It works it really works. I have been around healing for over 15yrs and this product really works, Not really going to get into how it works but from an energy perspective it makes clear sense why it works based on the vibrational frequency of resistance.

I have listened to my recording daily for the last six months and I clearly have been improving in many areas of my life. Ranging from mind and memory to flexibility and hip range.

AO Scan Mobile Device – A Digital Body Analyzer
The AO Scan mobile device is a modern device that utilizes a sonic frequency scan developed by physicists and doctors that were involved in the Russia space program.
The AO Scan mobile device is not technically a biomedical device, but a natural body scanner like echolocation: high-frequency sounds targeted to the body and their echoes interpreted to determine the response of objects.
Echolocation, also called bio sonar, is a biological sonar used by several animal species including dolphins.
The AO Scan mobile device is based on 20 years of research done by a number of Russian teams who recorded frequencies emitted by healthy, human organs.
They recorded what the normal frequency response for every age of subject, male or female.
The Scan is used for assessing organ function; not structure like tumors or broken bones. Therefore, it is like an ECG (electrocardiogram), or brain EEG (electroencephalogram).
It specifically measures the sonic vector potential, frequency response, and its output response.
When the response is low, vitality of the organ is lower; when high, the organ is under inflammatory stress.
Normal tone and function is registered by a middle range response. On a scale of 1 to 10, that is 4, 5, and 6.
The AO Scan mobile device is simple to use, it involves sitting with headphone-like transducers placed on the head around the ears.
The relevant frequency patterns are projected through the transducers, which are mostly inaudible as they are well above the audible frequency range. The sensor channels the information that comes off the test subject.
As a result of having the resonant frequencies passed through the headphone set to a computer based on the cloud, the readings are instantly analyzed, computed, and shown on the cell phone. The relevant stresses and deficiencies, which have had their frequency response determined, are compared against the norm.
The client then obtains the results which are most likely to help their current condition.
From a practical point of view, this method can help determine ideal therapies, supplements, and changes in lifestyle.
The AO Scan mobile device is fundamentally a functional test, not a medical diagnostic device that gives medical diagnosis for cancer, infectious disease, etc.
Instead, the AO Scan determines functional vitality, and can show early on the needed support and lifestyle changes required to restore function.
Likewise, in the face of disorder, it can pinpoint areas where support is needed, which standard tests may not show.
Even though we do not claim this to be a diagnostic device, doctors report that when they test their patients with known conditions and pathologies and correlate these with the AO Scan mobile device readings and the client’s site of disease, positive results were nearly 80%.
It is a wellness tool for people who want to self-help in today’s
confused and complicated situation.
It is a complementary tool, as is the weight scale, blood pressure machine, glucose meter, finger oximeter, and other home health tools.
The idea of frequency response being relevant in medicine has been given considerable scientific support by a range of recent research projects being carried out around the world for decades.
The readings shown by the AO Scan Mobile device have more in common with a natural medicine view of the way the body works, which is very much based on organ function.
A standard biomedical model is based more on structural disease and infection.
From a practice point of view, we have found that integrating these conventional and non-conventional approaches, which is what alternative doctors do in the consultation situation, are most helpful.
The rapid scan and convenience of the AO Scan mobile device is outstanding. A comprehensive scan takes only 90 seconds. The results are returned from the cloud instantly, and the results can be sent to the client’s email.
Not only does it scan the body, but the AO Scan mobile device generates reports for recommended nutritional supplementation.
The AO Scan mobile device can also generate therapeutic frequencies to give the body a daily sonic tune-up.
It features the Subtle Energy Frequency Imprinter (S.E.F.I.) Module.
It is designed to capture, amplify, and imprint subtle energy (radionics) frequencies to target a water remedy (similar to homeopathy), and into target objects such as sugar pills, tinctures, and even a healing bracelet, necklace, ring, etc.
The AO Scan mobile device is a multifunctional device and is designed for continual and ongoing upgrades as part of user subscription to the cloud.
Summary:
The AO Scan Mobile device has been used on hundreds of patients who were randomly presented with known pathologies, set to scan results, to test the accuracy of the AO Scan mobile device.
We found it gave correct findings relating to the area of dysfunction corresponding with known pathology in nearly 80% positive response rate.
It does not give any definition as to what the nature of any underlying pathology might be, but that can often be surmised based on presenting symptoms.
The AO Scan mobile device is a great quick-scan aide to any practicing physician; it can be a valuable tool just like bioimpedance, ECG, EEG, urinalysis, blood analysis, as well as other scanning methods. It is quick, inexpensive: a must-have tool for the avid user.
– AO Scan Mobile Team
Contact
Susan@ChangeYourBeliefsNow
To join this amazing opportunity.
A quick set up video
More extensive setup video
Google+
Toggle the Widgetbar