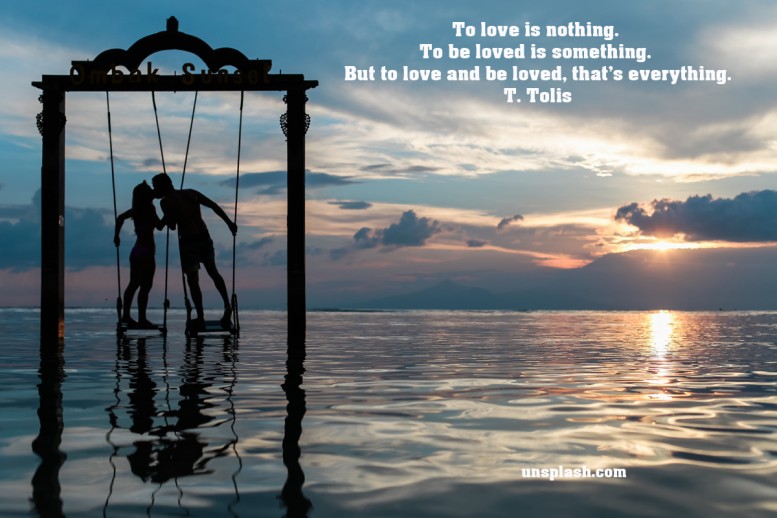 Carrie looked out her kitchen window as she was preparing dinner and saw the dark clouds of impending rain rush in.  She had just hung up the phone with Dan and was upset because Dan was now in a foul mood today.  It looked like the weather was agreeing with how her evening would turn out.  Even though it didn’t happen often, she was filled with dread when Dan got in his moods.  Normally he is so happy and caring.

Dan arrived and just talked about how angry he was at someone he had to deal with today.  It was an unreasonable co-worker, who always blamed his mistakes on Dan.  Carrie and Dan had been going to Law of Attraction workshops to help them have a more harmonious life.  They learned how important it was to expose each person’s life circumstances meant for their own growth and expansion.

Now Dan started drinking and she feared what would come next.  Carrie just listened to his ranting, but now Dan had enough drink in him to start picking at her.  Nothing was right about her.  He complained about how she looked, that she was getting fat.  He talked about how dinner wasn’t cooked right and asked how many years it was going to take for her to cook a decent meal.

As tempted as Carrie was to get caught up in a fight with Dan by defending herself, she avoided it.  All Carrie could feel now was the hurt and pain of the impact of more scathing words he just let slide out of his mouth.  She wanted to change herself to have a better life.  Healing herself in this chaos was important and she wished to know the secret on how to do that.

Carrie decided to practice something new she learned at the Law of Attraction workshop for this situation.  First she had to imagine if she had what she wanted, what would be the worst thing that she may experience.  That question led her to a deeper feeling of not being deserving enough to have a good life.  She was blaming all the bad experiences on her life as not being spiritual enough.  Yes, that was it!  That was the deep belief she kept reinforcing every time she had a bad feeling life experience.

The next step was to figure out if her belief of being not deserving enough was true or not.  So she asked herself, “if everyone is loved unconditionally, why would some people be judged as being good enough or not.”  They would not.  They would be as perfect as they are and good enough in each moment.

Now she understood that the belief of her being enough did not make sense to accepting her Divine nature.  Believing she did not deserve enough was out of alignment with who she truly was, because the Divine never holds her that way.  So every time she tells herself that she is not good enough, she is not being her real self.

Carrie now could feel this inner shift within herself.  She really believed she was good enough always in every moment.  The next step she learned was to give a positive meaning to her current circumstance.  After much thought, she realized that Dan was just reflecting to her that she needed to give up the belief of not being deserving enough.  She was now grateful for the opportunity to change this belief within herself.  So she chose for this belief to be gone.

Carrie realized she didn’t have to judge Dan anymore for saying things that used to make her feel not good enough.  She could forgive him for his drinking and his critical behaviors.

Carrie decided to get off of this game board of attracting his criticisms, and get on a new path of valuing and appreciating herself.  She was determined to respond this way now.

The next day, she felt better about herself.  After Dan left for work, Carrie started on the next suggestion they made in the workshop.  She was to imagine as best as she could how it felt having what she really wanted.  Feeling that she was good enough now, actually helped her imagine what kind of loving relationship she wanted.

She wanted to find true love.  What kind of man did she really want to live with?  What did this dream guy do with her?  How did she feel when she was around him?

By knowing what she didn’t want with Dan’s behaviors, she was able to figure out what she did want.  She wanted a man that adored her.  Her ideal man took her places with him and showed her off proudly to his friends.  He complimented her on what a wonderful person she was and the qualities she had that kept him attracted to her.  She could sense this as an outcome of her valuing herself and having her reality reflect that to her.

She wanted a relationship where her man spent time trying to understand how she felt about things and accepted her no matter what she felt or thought.  They would have many common interests and engaged in many interesting and fascinating discussions.  She imagined he would share her love of photography and would listen to different podcasts on photography with her.  She imagined how much fun they would have spending hours of interesting discussions after listening to them.

Each day, Carrie trusted that all would work out in a synchronistic way as long as she kept her inner messages consistent with whom she truly was.  She wasn’t going to give up on this goal.

Months later, she was living with the man of her dreams.

Do you want to change a relationship like Carrie did?  She needed help from her workshop, and maybe you want some help, too.  Buy the New Mastery Tools to Having Lasting Loving Relationships at the Miracle Grids Shop.  This guide and meditations give you step by step methods and understanding that can change your life!